The drought devastating parts of South Africa will cause the country’s farmers to lose up to R10 billion this year.

A report released by the UN’s food and nutrition working group last month found this drought – the country’s worst since 1992 – had caused a decline in maize production that had already led to an increase in food prices of 6.4%.

“South Africa’s first maize production forecast estimates the 2015 harvest to be the worst in eight years,” it found.

“Just the maize crop is down from 14.25 million tons [worth R25.4 billion] last year to an estimated 9.84 million tons this year. This alone translates to a loss in income of close to R10 billion. The total loss amounts to [several] billions [more],” he said.

Grain SA chief executive Jannie de Villiers warned that the country would have barely enough white maize for its own consumption, and would need to import about 700 000 tons of yellow maize to feed livestock, which would cost farmers R1.96 billion.

De Villiers said: “From May this year to January next year, we can expect an additional increase of between 15% and 20% in the maize meal price,” he said.

Figures from the Studies in Poverty and Inequality Institute (SPII) indicate the effect could be even worse.

Researchers working on the SPII Basic Needs Basket Project, which monitors the prices or cost of 39 goods and services each month countrywide, have found that the price of maize meal has shot up by 37% in urban areas in the Free State, 34% in North West and 29% in Gauteng. In rural areas, prices increased by 39% in the Free State and 25% in Gauteng.

The price of samp, SPII researchers found, increased by 41% and 38% in the Free State and North West’s urban areas, respectively.

Mandla Nkomo, operations director at TechnoServe, which assists emerging farmers, said the drought’s impact on its clients was devastating.

“In irrigation areas, farmers’ water allocations have been cut back, which has had a direct impact on the incomes of those farmers,” he said.

“In North West, KwaZulu-Natal and Mpumalanga, which are rain-fed areas, there has been a very heavy effect on the maize crop. I know one farmer who has had to write off his entire crop. Most grains have really taken a knock. And for stock farmers, the quality of the grain feed has not been great either.

“These emerging farmers are vulnerable anyway. They have no insurance, savings or anything like that, so they will take the knock full on. Basically, we have a 2015/16 season coming up for which farmers don’t have the resources to reboot themselves.”

Nkomo said that in the Nwanedi irrigation area in Limpopo, about 1 000 farmers had been forced to “reduce production by 50% because there is not enough water”.

Large companies Tiger Brands and Rhodes rely on the area for tomatoes, which will now have to be imported.

“We are expecting a real impact on food prices between August and November this year,” said Nkomo.

Purchase said the drought – which had been hitting North West, parts of the Free State and the Northern Cape for the past three years – had already diminished the country’s GDP. “Given its severity and prolonged nature, the economic effect will be, and is already, severe. The latest poor and disappointing GDP figures for agriculture – 16.6% negative growth in quarter 1 – are indicative of the drought impact,” he said. “Agbiz expects quarters 2 and 3 GDP figures to look even worse, as the full extent of the drought is only then reflected in the GDP figures.”

Emerging farmers, said Purchase, would be hardest hit because they did not have sufficiently strong balance sheets to absorb losses. “They cannot repay their production loans, and, worst of all, are going to battle to secure financing for the new season as their creditworthiness has been severely affected. We do not have a figure, but many farmers are at risk [of losing their farms],” he said. Purchase said farmers would need to make arrangements to carry over their debts, or many farming enterprises would become insolvent.

Absa’s agribusiness head, Ernst Janovsky, said the extent of the problem would only be seen next year. “Next year is the one to watch stringently. When farmers have diversity, they don’t have trouble,” he said. “We are, however, comfortable, because it is a small area that is affected when we look at our books.” 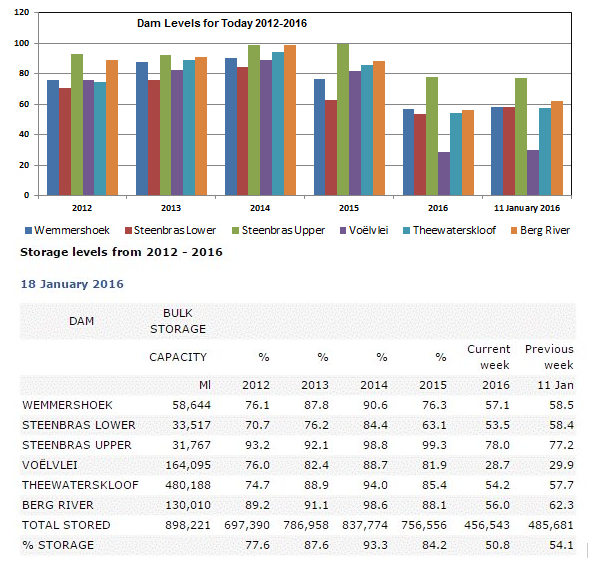